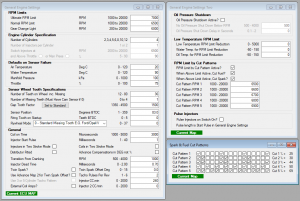 Whilst you can just use the hard and soft cut RPM limits set in general engine settings, you also have the ability to define 5 levels of your own cut patterns!

Why do I want this?

Depending on your application, there are a few reasons but the long and the short of it is that by default, the ECU blends from the normal RPM limit to the ultimate RPM limit but only by cutting the spark and you have no control over how it blends. If you define your own patterns, you can cut spark, fuel or both and control when they are cut.

Mechanical sympathy. We’ve all got that customer who eats through gearboxes like they’re going out of fashion. That same customer probably likes to bounce it off the limiter at every opportunity too and those con rods are probably about ready for some fresh air. By defining custom cut patterns, you can take into account how aggressively the engine accelerates to the limit you want and ease that customer into the redline, making the bounce a bit more gentle. For engines where the drop-off of torque is the reason for the limit, you might not need this but for engines that want to accelerate hard beyond the limit of the rod bolts or the valve train, it’s quite useful!

Firstly, set your RPM limits up as you normally would in general engine settings. Then head to general engine settings 2 and activate RPM limit by cut pattern – the makes the ECU ignore the soft “normal limit” in general engine settings but not the “ultimate limit”. You can then define a range of five RPM increments which will be your soft limit (you must define all 5). Once you’ve done that, head to spark and fuel cut patterns (under essential map settings) and define your cut patterns for those RPMs. Each box represents 1 spark/injection event. The first box is the first event to occur after the RPM limit has been breached. Subsequent boxes are then in firing order. So, for example, cut pattern 1 on a 4 cylinder engine could be like this: you’d cut box 1, skip 4, cut, skip 4, cut, skip 4, cut. This would give you a rolling 1 cylinder cut. By skipping 4, you move to the next cylinder, if you only skipped 3, you’d be cutting the same cylinder over and over.